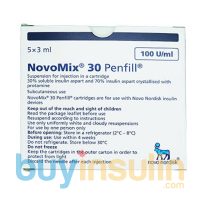 NovoMix is used for the treatment of diabetes mellitus. It helps diabetic individuals to improve glycemic control. NovoMix 30 is intended for patients over 10 years of age, while both NovoMix 50 and NovoMix 70 are designed for adult patients more than 18 years of age.

Use NovoMix exactly as prescribed. Unless directed otherwise, do not switch to another type of insulin. Medication changes may lead to dosage adjustment and should be performed under close medical supervision. NovoMix should be administered under the skin of the thigh or tummy (abdominal wall) via injection. Alternatively, it can be injected under the skin in the buttock (gluteal) or shoulder (deltoid). Do not inject NovoMix into the vein. NovoMix should not be administered with an insulin pump. Patients can inject NovoMix themselves (provided that they have been trained appropriately).

How does this drug work?

Diabetes is characterized by the lack of insulin production, which results in uncontrollably high levels of blood sugar (glucose). Basically, NovoMix acts as a replacement insulin by mimicking the actions of natural insulin secreted by the pancreas. Insulin aspart, the main ingredient, is synthesized using the innovative recombinant DNA technology. During the manufacturing process, a gene (or DNA) will be inserted into a yeast to allow the production of insulin aspart. While having essentially the same composition, insulin aspart in NovoMix has slightly different properties compared to human insulin. It has a considerably higher absorption rate and faster onset of action. There are two types of insulin aspart in the formulation: the soluble form and the crystallized form. Soluble insulin aspart is able to work within 10 minutes of injection, while crystallized insulin aspart is designed to be gradually absorbed throughout the day (therefore has a sustained blood-glucose lowering action). NovoMix has similar actions to that of naturally-produced insulin—it promotes the entry of blood glucose into the cell. Through the regulation of blood sugar level, NovoMix effectively reduces the symptoms (and complications) of diabetes.

The typical daily dose of NovoMix ranges from 0.5 U/kg to 1 U/kg. Doctors should perform blood glucose test periodically to determine the lowest effective dose of NovoMix.

These symptoms are mostly short-lived and mild in nature. If symptoms become bothersome, patients should see a doctor.